The centroid of a country (or area) can de defined in multiple ways. On the earth surface it is more useful to speak of the geographical center. It is possible to find lists of these centers for area's on earth. (parent page)

One quickly realises that these centers are not (always) good enough. Either they are in a location far away from population centers, or they fall in between a set of islands, etc. So we need to come up with a better estimate.

Any better estimate must reflect what we intend to achieve in the first place. We are talking about transportation and its impact. So we talk about distances, mode of transportation, the amount transported and the impact of it all. Any centroid should take this into account.

If we know only the country a product is bought in, we can either assumes the worst or the best. The worst is the maximum impact and the best the minimum impact. The minimum impact will imply transportation from the most centered location in a country.

In practice it will be quite difficult to solve this for all towns in an area. But can we do it for the largest towns? And how many towns should we incorporate?

Using the above considerations we can setup a recipe:

The recipe described above has been implemented in a Google spreadsheet. For each country (territory) a separate spreadsheet needs to be created (just copy an existing) one. Each spreadsheet has multiple worksheets.

This recipe has been applied on the following countries:

This approach of finding a centroid seems to give good results. As more cities are added the centroid does not change for most countries.

For small countries, it is clear that the major city should be used as Centroid. Think of Andorra, Liechtenstein, Monaco and San Marino. 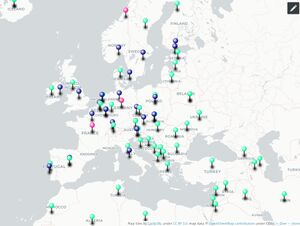 Map of population and geographic centroids

The city population centroids have been found a step by step process. This allows to see how the centroid changes after a city has been added. In general the largest city dominates the position of the centroid. And if that city is also close to the geographic centroid, it will be the centroid in the end (Belgium, Spain). If a large city is surrounded by other cities, then one of those can become the centroid (Norway, Switzerland). The layout of motorways can influence the selection between two cities (France).

In general we see that the largest city is also the centroid city, when it is really much larger than the other cities.

Some exceptions to this:

How good are these centroids? What happens when more cities are added? How good is good enough?

The eco-score label reduces every score (0-100) to just 5 levels . Each level represents a score range of 20. So the maximum bonus of 15 (which is part of the score) might change the eco-score level. Thus the accuracy required should be of the order of a bonus point.

So if we get an accuracy of 100 km the centroid cities are good enough.

Can the accuracy of the centroid city be determined from the actual calculations, or their development? Every time another city is added, the centroid might change. But how likely is it that this happens. That depends on the size and relative population of the added city. And it depends on weighted distance to the runnerup centroid city. If the weighted distance is very large, adding other cities will not budge the winner city.

In the calculated centroids, this implies:

Should we bother from transportation score point of view? Not for Norway and Portugal. For France and United Kingdom more cities should be added.

Can this approach also be used to get an indication of country size?